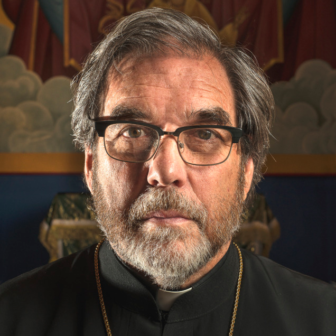 Fr. George is a 1980 graduate of Oral Roberts Seminary. Following graduation Fr. George studied at Holy Cross Greek Orthodox Seminary in Brookline, Massachusetts, and was ordained to the Holy Priesthood by His Eminence Metropolitan Philip in 1981.

Fr. George was born in Burlington, Vermont, and raised in Buffalo, New York, by Harold Claude and Mary Doris Eber. He is a 1968 graduate of Bucknell University in Lewisburg, Pennsylvania. Following graduation he spent almost four years in the US Army. He completed one tour in Vietnam as an infantry officer with the 25th Infantry Devision, earning Purple Heart and Silver Star medals. After finishing his military service in Colorado Springs, he worked in the real estate business and loved to ski.

In 1972 he meet Claudia Blue and the two were married in 1974. They moved to Tulsa for seminary in 1977. Fr. George and Kh. Claudia have two sons, Matthew and Joseph.