The Nativity of the Theotokos

The feast of the birth of Mary 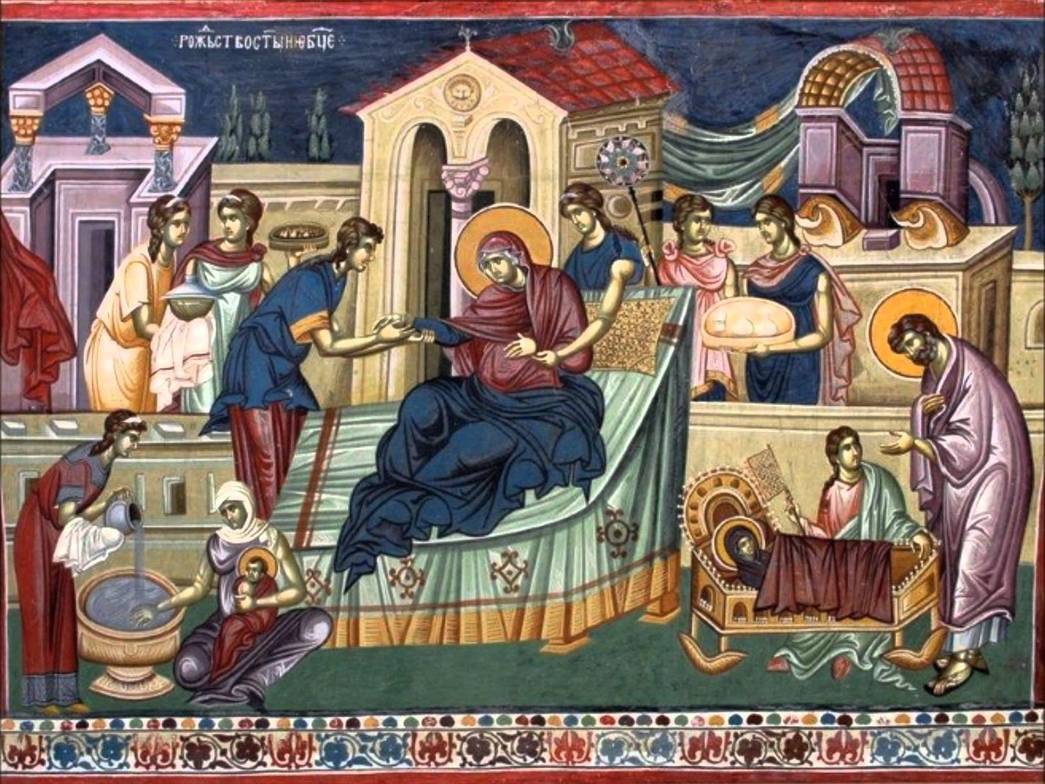 The first Great Feast to fall in the Church Year is the Nativity of the Most-Holy Theotokos. It is entirely fitting that at the beginning of the new religious year all Orthodox Christians should come before the highest example of human holiness that the Orthodox Church holds precious and venerates — that of Mary, the Theotokos, and Mother of God. This day is seen as one of universal joy; for on this day — the boundary of the Old and New Covenants — was born the Most-Blessed Virgin, pre-arranged from the ages by Divine Providence to serve the mystical Incarnation of God the Word.

The first Old Testament Reading of Vespers (Gen. 28:10-17) speaks of the dream of Jacob, one of the Old Testament Patriarchs, when he fled the wrath of his brother Esau. He saw a ladder extending from earth to heaven, with angels ascending and descending. When he awoke, Jacob blessed with oil the stone on which he had slept and called it Bethel, meaning house of God. The Most-Pure Mother of God is seen here as that ladder between heaven and earth, uniting earth with heaven in her womb. She who carried God in her womb is truly Bethel, none other than the house of God...and the gate of heaven (Gen. 28:17).

The birth of the Most-Holy Theotokos took place in the following manner: Her father, the Righteous Joachim, was a descendant of King David, to whom God had promised that from the seed of his descendants would be born the Savior of the world. Her mother, the Righteous Anna, was the daughter of Matthan, and through her father was of the tribe of Aaron and through her mother was of the tribe of Judah. The spouses lived in Nazareth of Galilee.

Joachim and Anna had no children, and all their life they grieved about this, especially since they were now in old age. Scorn and mockery was their lot, for at that time childlessness was reckoned as a shame. But they never murmured and only the more fervently beseeched God, humbly trusting in His Will.

Once, during the time of a great Feast, the offering which Joachim took to Jerusalem to offer to God in the Temple, was not received by the priest, who reckoned that a childless man was not worthy to bring a sacrifice to God. This greatly grieved the old man and he, counting himself only a sinner among men, decided not to return home, but to flee to a place of solitude in a deserted place.  Anna, having heard how her husband had been humiliated by the priest, began to fast, and in prayer sadly beseeched God to grant her a child. In the wilderness, secluded and fasting, Joachim also prayed to God about this.

This child, the Most-Holy Virgin Mary, pure and virtuous, surpassed not only all men, but even the angels, being manifested as the Living Temple, “the Heavenly Gate, ushering in Christ to the Universe as the Salvation of our souls.” The Nativity of the Mother of God pre-announced the approaching time when the great and comforting promise of God concerning the salvation of the human race from the slavery of the devil was to be accomplished. The Mother of the First-Born of all Creation was revealed to all of us as a merciful Intercessor to whom we perpetually run for help in all things.

- Excerpt from These Truths We Hold

By your Nativity, O Most-Pure Virgin, Joachim and Anna are freed from barrenness; Adam and Eve, from the corruption of death. And we, your people,
freed from the guilt of sin, celebrate and sing to you: The barren woman gives birth to the Theotokos, the Nourisher of our Life.
Kontakion of the Feast

This Weekend at St. Antony Divine Liturgy Tonight & A Hafli Update Sunday of the Fathers of the 7th Ecumenical Council