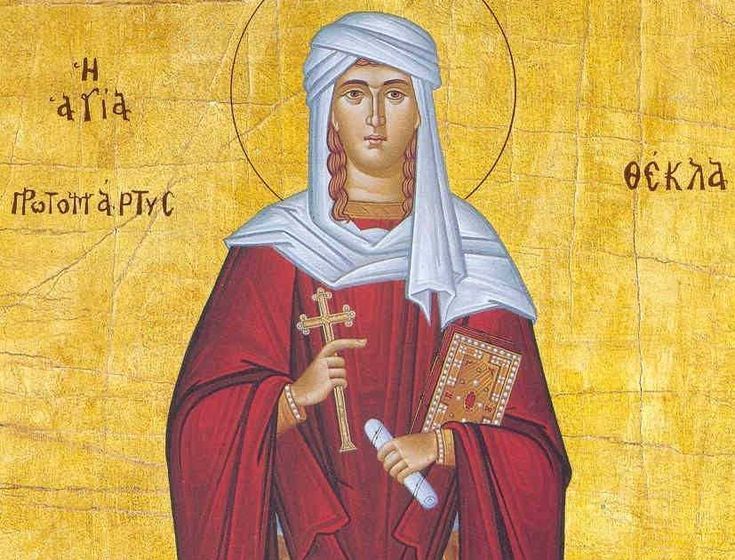 The Life of St. Thekla, a disciple and companion of the Apostle Paul in 1st century. She is given the title "Equal-to-the-Apostles" because she accompanied St. Paul in founding churches because her witness converted so many others to Christ, and she was the first woman martyr for the Christian Faith.

According to ancient Syrian and Greek manuscripts, Saint Thekla was born into a prosperous pagan family in the Lycaonian city of Iconium (present-day Konya in south-central Turkey) in A.D. 16. When she was 18 years old and betrothed to a young man named Thamyris, Saint Paul the Apostle and Saint Barnabas arrived in Iconium from Antioch (Acts 14). Thekla’s mother Theokleia prohibited her from joining the crowds which gathered to hear Paul preach. But Thekla found that if she sat near her bedroom window she could hear his every word. Thekla sat there for three days and three nights listening to Paul preach the word of God. She was parti­cularly touched by his call to chastity. As it became apparent that Thekla was becoming interested in the new Faith, Theokleia and Thamyris went to the governor of the city and complained about Paul and his preaching. To pacify them and the other outraged citizens of Iconium, the governor had Paul imprisoned to await trial.

When Thekla learned of Paul’s arrest she secretly went to the prison, and using her golden bracelets to bribe the guard, gained admittance to his cell. When she saw the Apostle she knelt before him and kissed the chains which bound his hands and feet. She remained there a long time listening to his message of the Good News of Jesus Christ.

Being concerned at Thekla’s prolonged absence, Theokleia and Thamy­ris asked her servant if she knew where she was. The servant said that Thekla had gone to visit an imprisoned stranger. Theokleia and Thamyris knew at once that she was with Paul. They decided to go again to the governor, this time demanding immediate judgement for the Apostle. After the governor chastened Paul for the disturbances he had caused in the city, he had him stoned and expelled from Iconium. The governor then admon­ished Thekla for her foolishness and commanded her to return home with her mother and fiancé. When Thekla announced that she had vowed to remain a virgin for the sake of Christ, her mother became enraged and asked the governor to threaten Thekla with severe punishment. The gov­ernor complied with this wish and ruled that Thekla was to be burned at the stake unless she renounced her faith in Christ.

When Thekla refused to renounce her Heavenly Bridegroom, she was taken to the arena for punishment. As she was tied to the stake she saw a vision of Jesus Christ which gave her strength to face the flames. The fire was lit, but as the flames came near Thekla a thunderstorm suddenly arose and a great torrent of rain and hail came down from heaven and extinguished the flames. Embarrassed because his plan had failed, the angry governor released Thekla but commanded that she must leave Iconium at once.

Upon her release, Thekla went to the outskirts of the city where she rejoined Paul. She told him of her trial and miraculous escape from punish­ment and asked for baptism. Paul refused to baptize Thekla, saying that this would be accomplished in God’s own way and time. Paul and Thekla then departed from the region of Iconium and traveled to Antioch in Syria. As they were entering the city a young nobleman named Alexander saw Thekla. Being entranced by her beauty he rushed forward and tried to seduce her, but Thekla fought him off, thus disgracing him in front of his crowd of friends. Alexander went to the governor of Antioch and complained that this wandering girl had disgraced him, a nobleman, in public. He demanded that she be punished with death. The governor complied and ruled that Thekla would face the wild beasts in the arena. Thekla’s only reply was that she be allowed to preserve her virginity unto death. Her wish was granted and she was given into the care of the noblewoman Tryphaena, a relative of Caesar, until the time of punishment.

When Thekla was taken to the arena, a lioness was set free to attack her. But to the astonishment of the crowd, the lioness approached the Saint and sat tamely at her feet. A bear was then released, but as it came close to Thekla the lioness rose up to defend her and killed the bear. A large lion was then released. The lioness again came to Thekla’s defense killing the lion, but losing her own life also. Then all the cages were opened and a large number of wild animals charged at the defenseless Thekla. After crossing herself and praying for courage, the Saint noticed a large tank of water which was nearby, containing the aquatic animals. She climbed into the water, asking that she might be baptized by Christ as she did so. Seeing that the beasts were unable to harm Thekla, Alexander asked that the Saint be given over to him for punishment. He tied her to two large bulls in the hopes that they would pull her asunder. But when the bulls charged off in opposite directions, the ropes which held Thekla to them were miracu­lously loosened and she was spared. Seeing that no harm could be done to Thekla, the authorities released her. She went to the home of Tryphaena where she remained for eight days preaching the Good News of Jesus Christ and converting Tryphaena and her entire household. When she departed from Antioch, Tryphaena gave her a treasure in gold and precious jewels.

After she left Antioch, Thekla journeyed to Myra where she rejoined Paul. She informed him of all that had occurred, including her baptism and asked that she might be permitted to spend the remainder of her life as an ascetic. Paul gave her his blessing and she departed, leaving with Paul all the gold and jewels that Tryphaena had given her so that he might distribute them among the poor and needy.

Thekla then traveled again to Syria where she went up into the moun­tains for a life of prayer and solitude. Many years later a young pagan found her praying in an isolated canyon and resolved to harass her and spoil her virginity. As he approached her and blocked her only exit to safety, she prayed that her Bridegroom would protect her as He had so many times in the past. At that moment the canyon wall was miraculously split allowing her to escape through a narrow crack in the rock.

Saint Thekla continued her life of asceticism and then peacefully fell asleep in Christ at the age of 90. Shortly after her death a community of virgins went to live in her mountain cell, building a small chapel to en­shrine her body. This Convent of Saint Thekla still exists today near the village of Ma‘loula, Syria.

Because of her many sufferings for the Faith the Church counts her as a “Protomartyr”. And because she converted so many people to Christ­ianity she is also know as an “Equal-to-the-Apostles”.

Holy Saint Thekla, pray unto God for us!

O Glorious Thekla, companion of Paul the divine, thou wast inflamed with the love of thy Creator. By the teaching of the divine Preacher thou didst despise the passing earthly pleasures and offered thyself to God as an acceptable and pleasing sacrifice, disregarding all suffering. Intercede with Christ, thy Bridegroom, to grant us his great mercy.

You were enlightened by the words of Paul, O Bride of God, Thekla,
And your faith was confirmed by Peter, O Chosen One of God.
You became the first sufferer and martyr among women,
By entering into the flames as into a place of gladness.
For when you accepted the Cross of Christ,
The demonic powers were frightened away.
O all-praised One, intercede before Christ God that our souls may be saved.

O glorious Thekla, virginity was your splendor,
The crown of martyrdom your adornment and the faith you trust!
You turned a burning fire into refreshing dew,
And with your prayers appeased pagan fury, O First Woman Martyr!